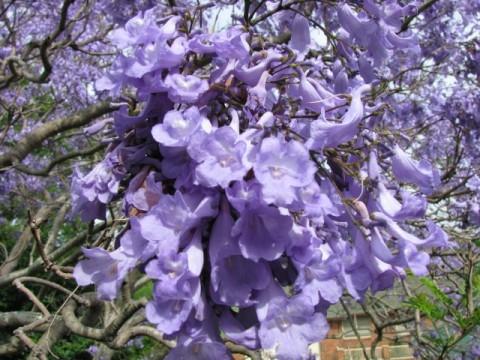 (The Jacaranda speaks) “Beloved and graciously attended are the fruits of your labours. Believe in yourself for you then draw the beauty unto yourself as you go about your daily tasks”

Like the scattered clusters of flowers on the tree, the Jacaranda Flower Essence is for people whose energies are scattered. They lack focus and concentration. They are generally creative people who have many ideas that they wish to bring to fruition and tend to have many unfinished projects underway at one time. They begin new projects with great enthusiasm, only to lose interest along the way.

The beautiful Jacaranda tree with its large fern-like leaves and masses of panicles of blue trumpet shaped flowers, colours the cities and country in the warmer climatic areas during Spring and early Summer. It is also known as Black Poui or as the fern tree. The Jacaranda tree originated from South America.

At times the people who would benefit from the Jacaranda flower Essence will jump from one job to another or they frequently move house, as they are unable to feel satisfaction in what they are doing or where they are living. They become restless and don’t have confidence in who they are or the choices that they make.

On an inner level there is a tendency to be mistrusting of their ability to produce something to their personal satisfaction. They have an inner agenda of “not good enough”, fearing that their finished products won’t be up to their own standard of satisfaction, let alone that of others.

The Jacaranda Flower Essence is for bringing a person to be more decisive, centered and trusting of their ability to create something that is to their personal standard of satisfaction. It assists them in holding their attention long enough to complete what they started, to feel confident and more comfortable with whom they are.

Blue Lace Agate: For the throat, heart, third-eye and crown chakras * Activating these chakras helps one to enter into high-frequency states of awareness * Imparts a sense of strength and courage * Facilitates the ability to discern truth and accept circumstances