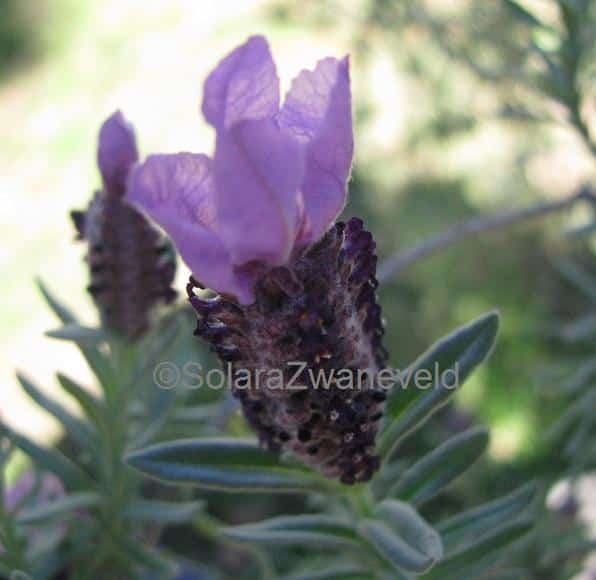 This essence was prepared with a Moonstone crystal

Stand tall dear one and know that we bring you calm and peace, and over time this will bring you health and well-being. We of the highest of the Divine “cushion” the difficult blows that life brings.(The Lavender speaks)

The Lavender flower essence is for those times in life when you may be feeling battered and blown about by life’s tumultuous happenings. It was prepared during a full Blue moon on 1st September, 2012 being also the first day of Spring in this southern hemisphere.

The flower spikes stand tall and upright. Strong in stance in readiness for whatever life brings you each day. The emotions and moods of humanity can range from rage to calm. This could be equated with the ocean varying in its intensity from deep calm to ferocious waves and wind, battering a boat against the jetty to then once again quietly lapping against the jetty’s side. Sometimes when such moods as these are held totally within they can cause destruction, disharmony, imbalance and problems with your health and well-being.

Each flower spike displays rows of tiny deep purple florets which burst forth their displays, not all at once but gently, several at a time. These rows of florets appear as if they would absorb and cushion the difficult blows that life brings, this being what the Lavender essence is able to offer you.

The Lavender essence is for calming the mind and emotions that seem to lie hidden beneath the flowering beauty of the self. With the opening of each tiny flower, there is reflected an aspect of opening of self-awareness – that which flows towards the recognition of your own magnificence within the family of humanity.

At the top of each flower spike 4 violet coloured bracts are displayed reaching upwards like arms reaching towards the heavens to draw down peace and calm from the Divine. Each of the individual tiny florets on the spike will carry 4 seeds not only for the continuance of the species but also offering seeds for the creation of new ways of being. The plant itself displays as scattered stems with the flowers formed only at the tips. This scattered display may also be found within a person who is experiencing difficulties in life and the Lavender essence will provide calmness to allow clarity to show through.

Peace, good health & well-being are mine

My sleep is refreshingly sound

Moonstone: Balancing, introspective, Reflective, Lunar * Relates to “new beginnings” * Acknowledging the up & down cycles of life * For feeling & understanding via intuition rather than intellectualising * Cleansing negativity from chakras; enhancing feminine aspects of one’s nature * Arousing tenderness within the self * Providing connection between physical, emotional & intellectual bodies * Enhancing assimilation of nutrients to assist in elimination of toxins & treat disorders of digestive & elimination systems