Menu
Contact Us
No products in the cart.
$0.00 Cart 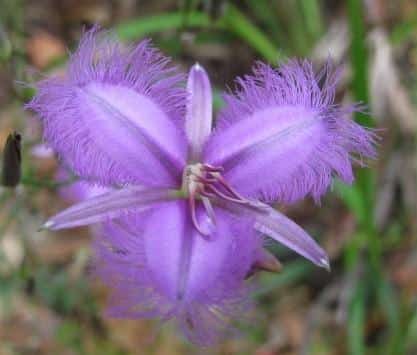 An Australian Native Flower (Made in Leura, Blue Mountains, NSW)

This flower essence was prepared with an Amethyst crystal

Hail! I speak to you of your connection to that greater part of you that resides within the WHOLE of you (The Fringed Violet speaks)

The Fringed Violet flower is mauve to purple in colour with 3 broad fringed petals, alternating with 3 narrower sepals. Each flower only opens for one day but the plants keep flowering for many weeks. The name is derived from the Greek words thysanotus meaning “fringed”; and tuberosus from the Latin tuberculum or “swelling”, relating to the underground tubers.

The Fringed Violet flower essence has the ability to re-connect the Spirit within after there has been a major shock or trauma to the system that has created a separation. Major shock or trauma can cause the body and aura to be pushed out of alignment, therefore causing imbalances within the body such as panic, shortness of breath or just feeling out of sorts. At times tears or holes in the aura can also be created.

Shock can be experienced through such incidents as surgery, the loss of a loved one, bad news or accidents. Shock vibrations can remain within the body and aura for long periods of time. Fringed Violet flower essence will help restore and re-align the body, regardless of how long ago the incidents occurred.

Some people who are alcoholics or drug users may also experience holes in the aura caused by those addictions. Because of the negativity that can take hold of these people, they may attract earth-bound entities that attach themselves to the aura of these people and create what they then perceive as hearing “voices in the head”. Fringed Violet essence will assist with the repair of the aura, sending those voices away and protecting them against any further unwanted energies.

When the aura is out of alignment some people may experience what they perceive to be psychic attack; which is when there is a perception of negative energies being directed at them, causing them to feel out of balance. At times when a person is feeling run down they may unwillingly take on the energies of others around them and become even more drained. Fringed Violet flower essence will protect them from further draining effects, allowing them in the meantime to become stronger.

Fringed Violet flower essence has been included within our Calming Essence combination blend. This blend of essences is predominantly to help take the shock factor out of an incident. It is handy to have on hand to be used immediately for shock incidents such as when a child has a fall hurting themselves. It is also useful to assist plants when moving them or when a major pruning job has been done. Calming Essence is helpful when taken during times of great stress such as when a relationship has just broken up.

The Doctrine of Signatures can be seen as the fringed petals sweeping the aura and body clear of all shock and trauma vibrations, as well as having the ability to “catch” scattered energies to then be transformed. The central cross within the flower reflects the ability to be calm, centred and focussed. One can get a sense of freedom from fear and scattered energies as their spindly stem of buds and flowers blow gently in the breeze.

Amethyst: A stone of “spirituality & contentment” * Clears the aura, stabilises & transmutes any dysfunctional energy located within ones body * Facilitates transmutation of lower energies into higher frequencies of both the spiritual & ethereal levels * Can be used to protect against psychic attack * Balances energies of intellectual, emotion, & physical bodies & provides clear connection between the Earth plane & other worlds * Bestows stability, strength, invigoration & inner peace * Assists in the assimilation of new ideas